HOW WE BUILT THIS

Artists, makers, and innovators reveal the process behind creating some of Spruce Peak’s iconic experiences.

Chances are, you’ve glided across the Rink, sunk your teeth into a bubbling plate of fire-baked raclette at the WhistlePig Pavilion, or marveled at the driftwood arch near the Adventure Center. But once you hear the stories of their creation, you’ll gain a whole new appreciation for what Spruce Peak has to offer.

In a nod to Jackson Hole’s famed antler arch, Burlington-based artist Clay Mohrman “wanted to create Spruce Peak’s take on an iconic piece of the landscape.” So in pursuit of this vision, he scoured the shores and surrounding woods of Lake Champlain this summer, looking for driftwood. Mohrman gathered a variety of pieces in specific shapes and sizes, depending on their intended application, eventually filling a total of five truck flatbeds.

He then designed and constructed a 10 x 16-foot metal frame, which he painted black. Next, he carefully braided LED lights through the frame, followed by driftwood. “I started with thick sticks about two feet long, and slowly wove in smaller, thinner pieces as the form started to take shape,” Mohrman says. He used a total of 9,000 nails to bring the piece together.

By November, the work was complete. To move it from his studio to the mountain, a crane lifted it onto a flatbed truck and then lowered it into position at Spruce Peak, where you can walk beneath it today. Get your cameras ready! 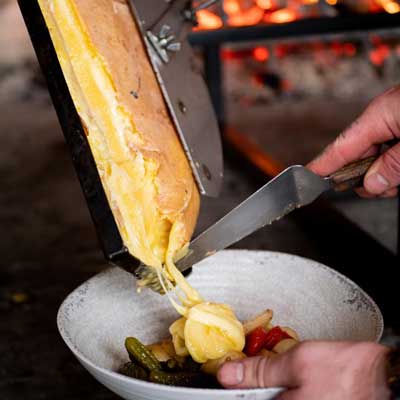 Along with the wickedly good spiked apple cider and massive stone fireplace that warms you through to your bones, one of the most enjoyable parts of being at the WhistlePig Pavilion is watching Spruce Peak’s culinary team prepare the tastiest raclette this side of the Alps.

On any given weekend day, you’ll see Chef Nate Kulchak staked in front of the earth with an ingenious cheese-melting contraption in hand. Kulchak specially designed the machine to cradle the cheese so that it yields an irresistibly silky texture and the kind of subtly smoky flavor you can only get from cooking over an open flame.

Whereas most raclette grills have a heat source at the top, Kulchak’s apparatus holds the cheese so that it faces the hearth. It features two arms, each equipped with trays to catch drips and clamps to grip half a wheel of cheese—that way, while he’s scraping cheese for one order, the other arm is already in the fire, warming cheese for the next customer. Kulchak based the dimensions of the arms on the circumference and thickness of the 20-pound cheese wheel. (Called “Reading,” it’s an artisan raclette cheese from Spring Brook Farm, in Vermont.) He then gave his drawings to a local blacksmith to build.

The cooking process itself is a true art form. “You want the cheese to be quite close to the flame so that it melts as quickly as possible—yet you only want to heat the outer layer of cheese, not the entire wheel,” Kulchak says. “It’s a living, breathing thing.” He explains that his technique constantly changes, depending on factors like the type of wood in the fireplace or what time it is (the cheese gets softer and melts faster as the day progresses).

When he hears the cheese bubble and sees a little steam or smoke rise up, Kulchak rotates the arm out of the fire, turns it so that the wheel is upright instead of horizontal, and scrapes it—charred, crispy rind and all—onto potatoes and pickles with roasted tomatoes or cured meats.

the rink at spruce peak 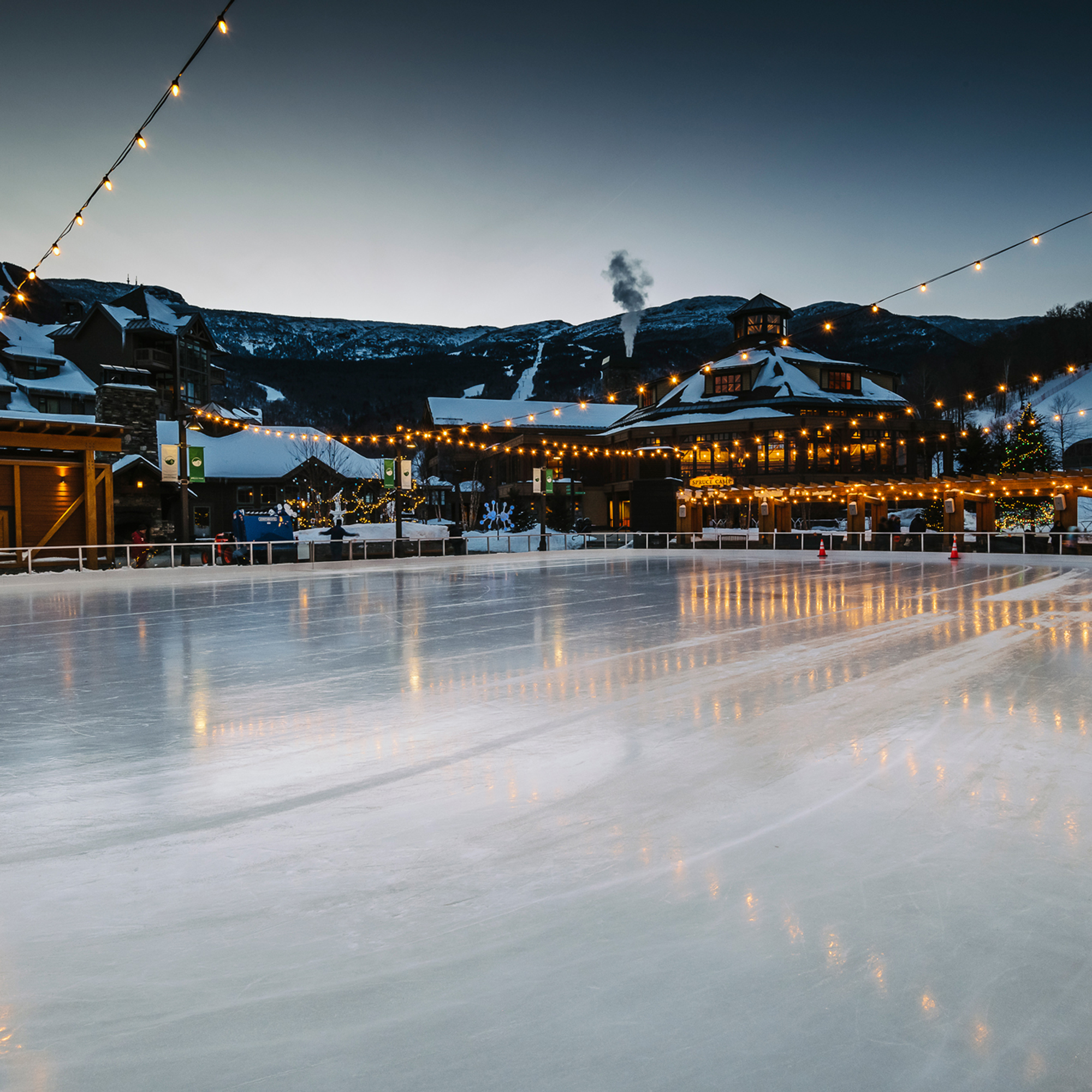 It’s hard to believe that just a few months ago, the Rink was a vibrant Village Green, hosting bustling farmer’s markets and lively summer concerts. And glancing at its placid,
mirror-like patina, you’d never guess at the tremendous time, effort, and tech savvy integral in its construction.

The transformation begins the third week of October. First, the surface of the Green is leveled with sand, to smooth out low spots. Next, the base of the Rink is screwed into
holes in the granite perimeter of the Green, creating an 80- x 120-foot oval.

Two plastic liners are then laid down over the base. The railing and plexiglass walls are assembled. Finally, plastic tubing is rolled out in sections over the liners. Fittings on the
tubes connect to piping that runs underneath the Rink and to a chiller—essentially, a giant refrigerator—in the Adventure Center. The tubes are then filled with glycol (a nontoxic solution that can be cooled to below freezing temperature, but remains a liquid, rather than turning solid), which the chiller cools to below freezing. “It’s like radiant heating in reverse,” says Nick Mann, project manager at Spruce Peak. “We are freezing the ground, rather than warming it.”

The next step is laying down the ice. A large hose is connected to a fire hydrant and floods the Rink with water. Once the water makes contact with the glycol-filled tubes, it freezes. Then another layer of water is applied and frozen, and another, and another. Once the ice is thick enough, a tractor drives over the surface to break up any weak areas or air bubbles. Then more layers are added and frozen until the ice is thick enough to completely cover the tubing by a couple of inches and create an even plane.

Adding to the challenge: The Rink is located above a heated parking garage. It takes about 12 days 36,000 gallons of water to make the ice.

Weather, of course, plays a significant role in the Rink’s creation. “It doesn’t need to be freezing, but the colder the air temperature, the better,” says Spruce Peak project manager Jeff Nichols. “Even with the glycol solution, it’s difficult to keep the ice from melting above 50 degrees.”

If it rains after the ice has been laid down, the water needs to be squeegeed off. “If you let rainwater freeze on the Rink’s surface, the ice gets too thick, making the Rink less efficient and more difficult to keep frozen at the surface,” Nichols says.

Snow is also problematic. “Last year we got buried right after the piping had been laid out, but the rink wasn’t flooded yet,” Nichols says. “It took a lot of man hours to very gently shovel the plastic piping and clear off the snow to the point where we could add water to create ice.”