Gazing over the expansive hillsides of Ellison EstateVineyard in Grand Isle, you almost feel as though you’ve been transported to the Scottish highlands. The 50 dazzling acres of countryside are speckled with grazing sheep and proffer sweeping views of Lake Champlain, framed by the Adirondacks on one side and the Green Mountains on the other.

Founded in 2018 by Kendra and Rob Knapik, who also operate a cellar and tasting room in Stowe, Ellison Estate Vineyard exemplifies the exciting movement in Vermont wine and produces some of the most groundbreaking local wines: bright and balanced bottles crafted with little-known grape varietals that pay homage to the island’s terroir.

Ms. Knapik—a lively, friendly self-professed “wine geek”—is a veterinary oncologist; the affable and easygoing Mr. Knapik chairs the physics department at Norwich University. Prior to establishing Ellison Estate Vineyard, they were looking for a way to find flexibility with their growing family and for their work to become more integrated into their lives.

They initially thought opening a farm to table ice cream business, where they had visions of raising their own cows,might be the ticket to the lifestyle they craved. But a long love of wine prompted Ms. Knapik to take a University of Vermont viticulture course on a whim. She began to ponder the idea of a business making wine instead of sundaes. But could fine wine be crafted in the notoriously cold and rainy Vermont climate?

Where to Find Vermont Wine

Pick up a bottle at Dedalus, Cork, Commodities, Public House, and Edelweiss in Stowe. Or take a day trip to the tasting room at Ellison Estate Vineyard. 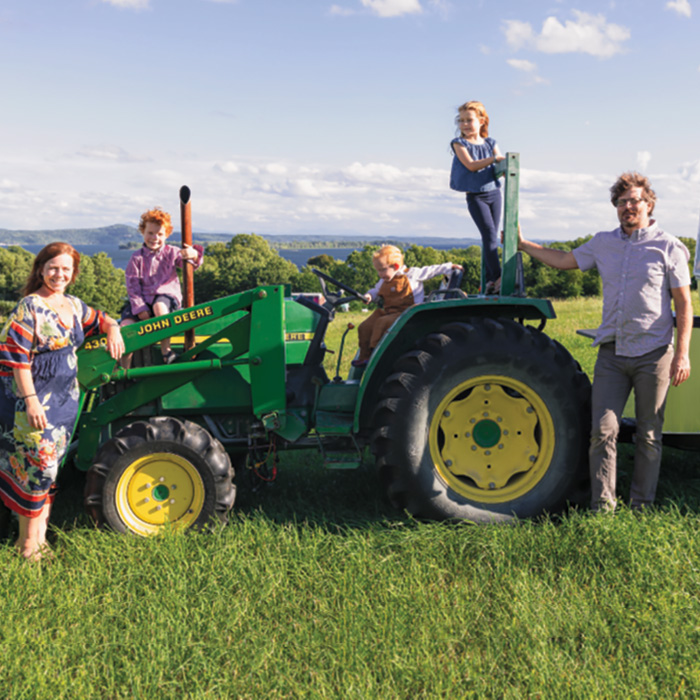 Wine has been made in the Green Mountain state since the late 1990’s, back when big California cabernet and chardonnay were king. Winemakers here on the East Coast often took their cues from established wine regions in California, where vitis vinifera (the type of grape vines used to make the most familiar types of wine) is mainly grown.

While Vermont is too chilly for vitis vinifera, hybrid grapes—varietals that few have heard of, such as Marquette, St. Croix, Frontenac Noir, and Louise Swenson (see sidebar)—take beautifully to our soil. “A cross between vitis vinifera and grapevines native to North America, hybrids are tolerant of cold temperatures and resistant to disease,” Ms. Knapik says.

Little was known about how to produce wine with hybrid grapes, but they tend to be higher in acidity and carry a different flavor profile than some vitis vinifera. So some producers used techniques like sweetening the wine to balance out the acidity or overly oaking the grapes in an attempt to replicate the taste of California wines. These attempts often fell flat, giving Vermont vino a middling reputation.

That said, these early forays into Vermont winemaking laid important groundwork for what came next.

In 1999, Deirdre Heekin, founder of La Garagista wine in Barnard, began experimenting with creating wine that showcased the natural qualities of Vermont’s hybrid grapes. Instead of manipulating the grapes with chemicals and additives to make them taste like a Napa cab or chardonnay, she embraced their authentic flavor. Her minimalintervention, biodynamic vintages debuted to the public in 2010. For many, the fresh and innovative bottles she produced were a wake-up call.

“Back then, there was not a focus on highlighting the terroir of Vermont,” says Camila Carillo, assistant winemaker for La Garagista and producer of La Montañuela wines in Hinesburg, recalling the first time she took a sip of La Garagista. “I had never tasted local wines like theirs and I was completely hooked.”

Sampling La Garagista wine was also a turning point for the Knapiks, who realized their dream had legs. “It was absolutely delicious,” Ms. Knapik says. “I thought, not only can we make wine in Vermont;we can make wine we really want to drink.”

Ellison Estate Vineyard and La Monteńuela are part of a growing list of vibrant new producers (including Stella 14, Kalché, and Iapetus Wine) who were inspired by La Garagista and the organic farming movement.

They almost exclusively use hybrid vines, and they’re focused on bringing out the grapes’ essence to create refreshing, highacid wines. “Instead of trying to hide the acid, we embrace it,” Ms. Knapik says. “Acidic grapes make excellent sparkling wines and food wines.”

Many effervescent Vermont wines are colloquially called a pét-nat, short for pétillant naturel, or “naturally sparkling.” This is an ancient technique of making bubbly wine by allowing it to ferment in the bottle, yielding easy-drinking wine that’s fruit-forward and subtly fizzy. Ellison Estate Vineyard, for example, makes a yummy sparkling red that tastes just like an Italian Lambrusco.

Another unique style of winemaking some producers have adopted are coferments, incorporating other fruits into their wine (such as apples and pears, which grow plentifully here). The result is wines that are clean,with balanced acidity and good structure.

A hallmark of the new wine movement in Vermont is that many of these producers are using minimal intervention in the winery, known colloquially as natural winemaking.

“Biodynamic farming practices in the vineyard, native yeast fermentations, no filtering, and reducing or eliminating sulfites has allowed some really beautiful wines to be made,” Ms. Knapik says. “We let the grapes show their true colors.”

And this less-is-more approach allows their flavor to shine.Many natural Vermont wines by Ellison Estate Vineyard, La Garagista, and Stella 14 have a distinctly Old World feel to them. Like a lot of European wines, they are wonderfully lightbodied, with greater acidity andminerality. Now that’s something we can drink to! 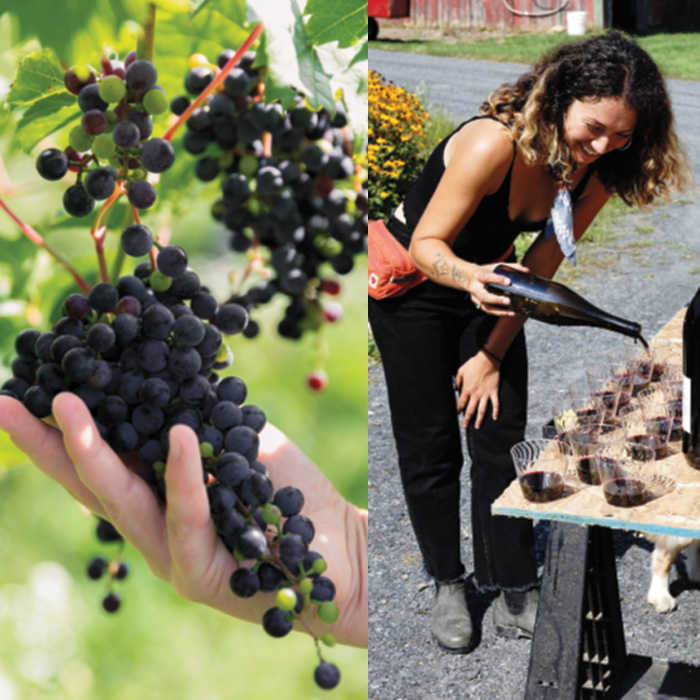 Meet the little-known yet delicious varietals that thrive in the Green Mountain State.

Marquette A Pinot Noir hybrid that produces complex red wines with a ruby color. It has flavors of cherry, blackberries, pepper, and spice.

Frontenac Yields a dry wine with a deep garnet color and aromas of cherry and other red fruits with a palate of blackberry, black currant, plum.

Petite Pearl Wine made from Petite Pearl grapes has qualities of spice and jammy fruits. It is also blended with other northern reds to add softness.

Frontenac Gris This copper-colored grape produces wines with a characteristic peach flavor. They are also blended with neutral wines to add fruit notes and make an excellent rose.

Prarie Star A neutral grape that adds body to other wines, Prairie Star also has tropical fruit notes and a long cinnamon finish.