THE LEGENDARY STOWE DERBY CHALLENGES CROSS COUNTRY SKIERS TO TRAVERSE FROM MANSFIELD’S PEAKS DOWN TO THE VILLAGE IN A ROLLICKING RACE TO THE FINISH LINE.

“Every derby has its stories—and there are epic stories,” Cap Chenowith says with a chuckle, as he recalls years past of the Stowe Derby: one of the country’s oldest and most unique ski races. Chenowith should know. The Stowe resident has participated in 34 of them—his first in 1973, his last in 2022.

The Stowe Derby begins near the top of Mt. Mansfield, where racers careen down the Toll Road trail. Once they reach the bottom, they speed through the Stowe Mountain Resort Cross Country Center and across Adam’s Camp. The course follows the Catamount Trail until it connects with the Stowe Recreation Path and continues toward downtown Stowe, ending at the iconic Stowe Community Church on Main Street. Winners complete the Derby in around 45 minutes; it takes recreational skiers a couple of hours.

But while it may sound picturesque, the course requires participants to ski approximately 20 kilometers of challenging terrain, including a total vertical drop of almost 2,700 feet—clad in only Nordic skis.

Collisions—and resulting acts of valor— make up many a famous Derby story. “There are some hellacious crashes, of

which I have had several,” Chenowith says. “You’re going 40 miles per hour down the mountain [on cross country skis]: All you have to do is catch an edge and you end up cartwheeling. People have finished on one ski, people have finished with one pole, but the idea is to finish.”

One such story, forever enshrined in the memory of another Stowe resident, is the time when the late Peter Ruschp broke his binding in a Derby pileup. “He managed to finish after shoving a stick into the binding to get it to stay,” his son, Andrew Ruschp, says. “I remember thinking, ‘that’s so cool!’” For Andrew Ruschp, who has skied in most of the Derbies since his teens (he’s now in his early 40s), familial stories can be traced all the way back to the Derby’s inauguration: a gentleman’s bet between his grandfather, Sepp Ruschp, and a friend, Erling Strom.

The year was 1945. Erling Strom, a world- famous mountaineer from Norway, and Sepp Ruschp, the head of the Mt. Mansfield Ski Club hailing from Austria, were exchanging views on ski gear. The eventual subject of debate: would Nordic skis (Strom’s pick) or alpine skis (Ruschp’s choice) win out in a race that would test a skier’s all-around ability? A race, say, that started from the top of Mt. Mansfield and traveled across the valley, finishing in Stowe’s historic village. It wasn’t long before the pair had this very course set for a race to settle things, once and for all.

That first Stowe Derby, put on by Mt. Mansfield Ski Club, ran on the last Sunday in February, 1946. Twelve men participated. Ruschp, on alpine gear, won that day. But that wasn’t the end of it. Strom challenged

Ruschp to a rematch the following year. Ruschp was victorious yet again, and the race turned into an annual tradition.

For the next 20 years, Ruschp and Strom zipped down the same course on the last Sunday in February. The one rule—that racers could only use a single pair of skis to cover all of the terrain—became part of the Derby’s lore...and lure. And as the years ticked by, hundreds of other racers began joining in. (Today, nordic skis are the most popular gear choice; alpine gear is rarely if ever used.)

In the mid-60s, a spate of unfavorable weather led to repeat cancellations. The Derby fell off the map until 1972, when Johannes Von Trapp of the Trapp Family Lodge and Mt. Mansfield Academy brought it back. After its revival, the Derby began to snowball, drawing 700-plus racers by the 1980s. “It was a big party day, with wine and food stops along the way,” Chenowith recalls. A tradition of racers donning costumes, from tutus to moose antlers to cow suits, added to the fun.

In 1987, with the advent of skate skiing, Derby organizers split the event into two races: a skate competition, followed by the classic nordic competition. Skate skiing (also called freestyle skiing, where skiers move in a side-to-side motion similar to skating) is much faster than classic cross-country—it would win in a race every time. They also added a “Derby-meister” category for the skier who doesn’t think one lap is enough: Derby-meisters ski both the skate and classic Derby.

The prospect of downhill skiing on cross country skis is daunting, to say the least. On alpine skis, you can regulate your speed by making turns all the way down, enabled by your skis’ metal edges. Nordic skis have no edges and are ultra lightweight. In addition, your heel is free, compared to alpine skis where the entire boot is secured. “This alone deters the faint of heart from signing up for the Derby,” says race director Sarah Sterner. “Racers must rely on their skill and strength alone to complete the descent safely.”

Another stumbling block: Toll Road, where the race begins, is narrow and windy; you never know what you’ll discover on the path ahead. “You might come around a blind corner to find three people laying across the ground in front of you,” says Jeff Nichols, project manager at Spruce Peak. “There are a lot of surprises and you have very little control, which is super scary.”

Moreover, you depart from the top of the mountain in groups of four, leaving every 30 seconds. “You are side by side with other people, touching and bumping them,” Nichols says. “It is easy to fall and hard to recover your balance.”

Along the route, spectators on the sidelines applaud the skiers, often ringing cowbells handed out to racers along with their bibs the night before. “Crowds tend to congregate wherever there will be big falls,” Nichols says, citing one particularly tough corner where Toll Road connects to the ski trail on top of the triple. “There’s a roundhouse turn with a steep drop-off that’s famous for tremendous crashes.”

In fact, ski patrol is on standby at this danger zone, ropes in hand, ready to pull up skiers who tumble over the edge. “At least 100 people will line up here to watch,” Nichols says. “They cheer when racers make it—and when they fall!”

So what’s the secret to getting to the bottom in one piece? “Don’t come full tilt around tight corners,” Nichols says. “Check your speed by breaking into a snow plow or throwing your skis sideways.”

Once you reach the base, it’s typically smooth sailing into town. The race culminates with the Derby Party, where everyone—from racers to friends and family to casual spectators—comes together to celebrate the winners and swap stories from the day.

Cheers to the Derby

Today, Mt. Mansfield Academy continues to organize the Derby, which is open to skiers ages 14 and older. While it attracts some serious competitors—Olympians, U.S. Ski Team members, NCAA champions—it has always been, and still remains, a race for anybody and everybody who loves to ski.

“It’s incredible and unusual—you have to go down the biggest mountain in Vermont, and then travel cross-country through town,” Sterner says. “It’s a jack of all trades, master of none sort of event.” Many racers spend all year looking forward to the Derby, and have years’ worth of fond memories of skiing the course.

Like his father and grandfather before him, Andrew Ruschp still remembers the extraordinary anticipation he felt leading up to the first year he was old enough to participate — and he’s already looking forward to racing with his daughter (now just a toddler). She’ll be the fourth generation of Ruschps to ski the Stowe Derby. “I feel honored that the Derby is still in existence,” Andrew Ruschp says. “It’s part of the fabric of Stowe.” 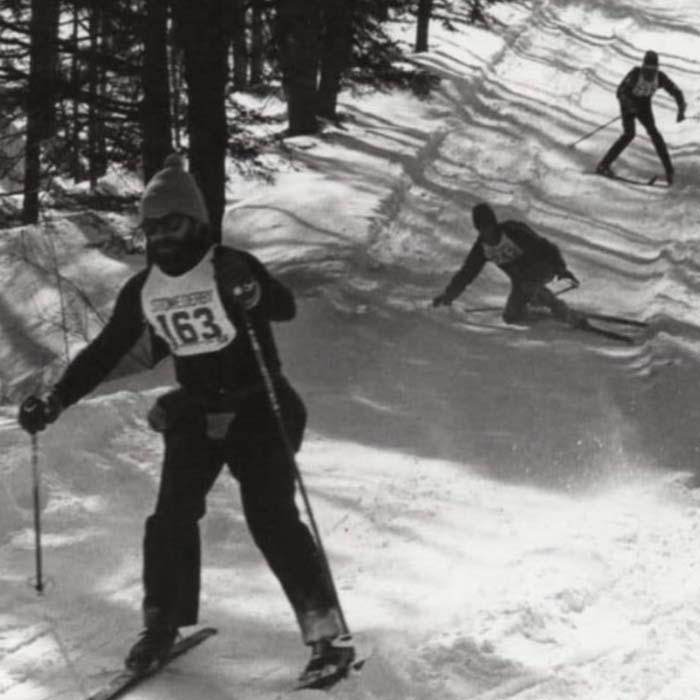 In a 2009 essay for the Stowe Reporter titled “Derby Courses I Have Known,” long-time Stowe Derby veteran Cap Chenowith takes us along for the ride through spots on the route that lend themselves to the most epic pileups.

“In 1973...you skied across the [Stowe Mountain Resort Cross Country Center]
field, crossed Route 108...and across that field to the old Harlow Hill Road. This is now a driveway, but at that point was an old road, steep and turny, down to the present-day driveway of Turner Mill. At the base of the icy downhill was a sharp left with three frozen hay bales to bank off. By the time I got there, there were piles
of people in all manner of supine positions who had impacted the bales, making the turn even more difficult. This turn led to a narrow plank bridge over the Notch Brook, where, if you did make the hay-bale turn, you risked a launch into the river. I landed butt-first on a rock.”

”We went...up the fabled Pig Farm Hill to a daunting downhill that crossed Cottage Club Road where the Sunset Grill is now. Crowds gathered there to cheer the carnage because anyone worth his salt had to take the last 300 meters of the hill straight, just to show the crowd who was who. You always caught air after crossing the road at Mach 1, with the risk of a fallaway landing; there were usually piles of people and skis to contend with.”

“Instead of climbing to Valley View (as is done today), one...hit Adams Camp Road...then took a left down Adam’s Chute, an ice-glazed, 400-meter bobsled run down to the river. Once entering the chute, much like the Running of the Bulls, there was no out—you were along for the ride. One had to jump over prone bodies, use people as speed limiters, and generally hang on. A huge crowd always assembled at the river for the 90-degree right-hander about 10 feet from the river wall; it was well worth the wait, as numerous skiers piled up, hit the fence or just plain went into the river. This course lasted until the flood of 1993, when Adam’s Chute was totally washed out.”