WHEN THE SAP STARTS FLOWING IN EARLY SPRING, FAMILIES ACROSS VERMONT TAP THEIR OWN BACKYARD MAPLES TO BOIL DOWN INTO HOMEMADE SYRUP.

Photos and Essay by Brian Mohr and Emily Johnson

Our oldest daughter, Maiana, 9, skied down our hill and into the yard, and opened her mouth beneath the lip of a maple tap. Drip, drip, drip.

“It’s so yummy!” she announced. “Would you like to try?” We followed her lead, collecting a cupful from a filling sap bucket to pass around. Subtly sweet, a little maple sap on the lips is a sure sign of winter winding down. The day was warming fast, and we had another handful of trees to tap, so after a quick sip, we kept moving. Lenora, 7, hung each bucket on the tap hook as we traversed from tree to tree. She needed help attaching the lids onto the buckets at first, but then got the knack of it. It was likely to be the first good run of sap.

“Can we make that maple cream thing again... the hot one?” Lenora wondered. When boiling sap has just begun to sweeten along its journey to syrup, we fill our mugs with the hot sap and stir in fresh cream. It’s incredibly tasty, and hits the spot on a crispy, cool evening, standing around our little maple cooker. Backyard maple sugaring comes in all forms. Many families collect just enough sap to boil a few pints of their own maple goodness. Others go big, producing plenty of syrup for multiple households and friends—and perhaps even for barter or sale. Either way, it’s no small task when about 40 gallons of sap is needed to make just one precious gallon of Vermont’s favorite elixir.
We begin by tapping maple trees before the sap starts to flow during mid- to late-winter. We drill into the trees (as long as it’s done properly, this won’t cause damage) and then set the taps. Traditionally, buckets are hung from the taps to collect the sap, which flows best when the days are warm and sunny, but nighttime temperatures still drop well below freezing—that is, prime spring skiing weather. As the buckets fill, we empty them into larger containers until there’s enough to boil into syrup.

As most sugar makers still do, we cook our sap over a very hot wood fire, using a simple boiler (also called an evaporator) crafted from a 50-gallon metal drum, an oil-barrel wood stove kit from the hardware store, and a couple of large, repurposed catering pans. It works like a charm for the scale we’re at—we tap about a dozen trees, yielding a couple of gallons of slow-cooked syrup.

Ultimately, maple sugaring is more about connecting with the waking trees, longer days, and people we love than it is about banking a few sweet calories. That afternoon, we gathered with friends around our maple cooker as the heating sap released clouds of steam into the frosty air. Maiana carefully swirled the sap with her ladle and poured it into our mugs.

The back roads were a muddy mess, the garden was still encased in ice and snow, but the sweetness of winter giving way to spring was irresistible. Emily slid up on her skis, having just enjoyed a few human-powered laps on our hill. Reports of nearly perfect “corn” snow on our west-facing slope had me following her lead. We topped off the pans with fresh sap, stoked the fire raging beneath them, and headed up for another run before dark. Life is good.

01 A friend immerses himself in the scents and flavors of boiling sap.

02 Maiana savors her first taste of maple sap for the season.

03 Checking the sap level on snowshoes

04 Brian stokes the flames before heading up for another ski run on the backyard hill.

06 Lenora helps tend the fire in a friend’s homemade boiler. 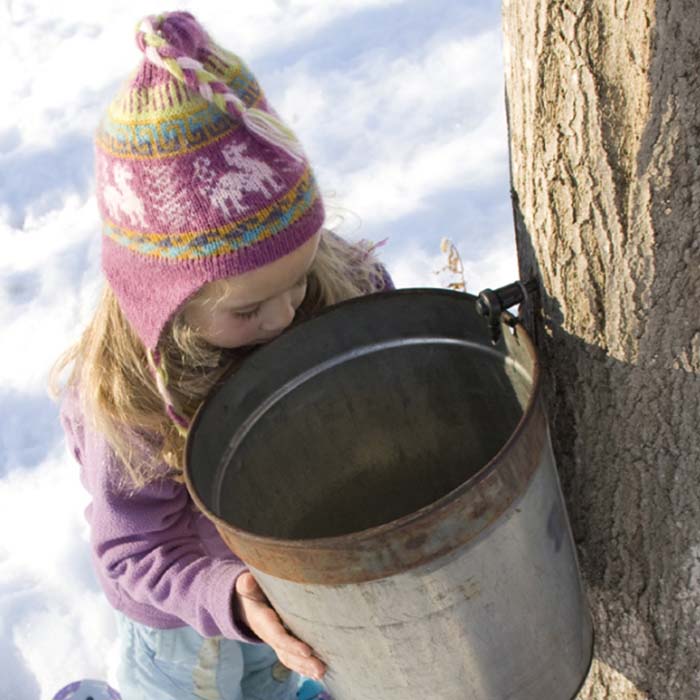 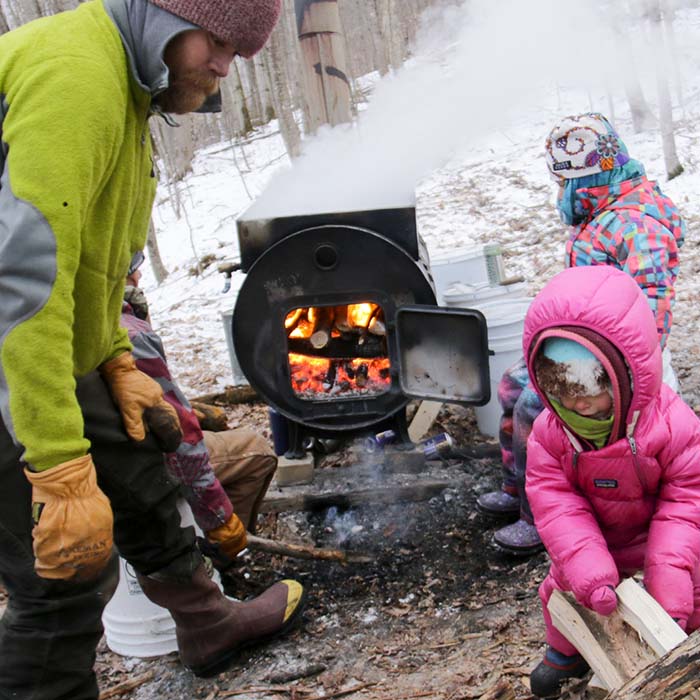 07 Standing in front of the evaporator, Lenora discovers that even Piggy likes maple sap!

08 A full moon rises over a forest of sugar maples, and a very hot fire, in the heart of Vermont’s Green Mountains.

09 Lenora, then 2, takes her first sips of warm maple sap.

10 Lenora and Maiana enjoy a lunch break on the deck during a warm, late winter afternoon, while maple sap flows into our collecting buckets nearby.

11 Tending the fire one last time for the night

12 Adding sap to the pan on a chilly March day