After a long day of working in fields, barns, and greenhouses across the state, the guests of honor begin to trickle into Alpine Hall — the new Spruce peak culinary flagship restaurant — for a seven-course feast. Executive chef Sean Blomgren and beverage manager Katherine Thompson eagerly greet them as they arrive in the contemporary, wood and dove-gray dining room, with floor-to-ceiling windows overlooking the ski slopes.

Blomgren and Thompson have been anticipating this evening for months—not only because the menu is extraordinary, but due to the distinctive group of diners. They’ve gathered the Vermont farmers, growers, and food purveyors who produce many of the ingredients in Alpine Hall’s locavore menu.

“The idea behind this dinner was to bring together our most cherished food partners to thank them for their support and look ahead to the future evolution of Alpine Hall,” Blomgren says, before retreating to the open, airy kitchen. “It was also an opportunity to give back and treat these incredibly hard-working people to a one-of-a-kind dining experience featuring their own products.”

Zoe Brickley, marketing manager of Jasper Hill, a working dairy farm that produces some of the country’s finest cheeses, heads to the bar for a cocktail invented by Thompson. Sheila Patinkin of Vermont Wagyu, and her colleague, veterinarian Roger Osinchuk, soon join her.

Before long, the rest of the so-called green-collar guests have arrived and take their seats at a long table in the center of the restaurant for a meal everyone knows will be superb. After all, they grew most of the food, and Blomgren—who has worked at the Mandarin Oriental, the St. Regis Aspen, and the Madeline Hotel in Telluride—is cooking.

The other diners include Tara Pereira, head of the Vermont Fresh Network, and Koi Boynton, assistant director of Salvation Farms, both nonprofits aimed at supporting the Green Mountain state’s independent farmers, fostering relationships between farmers and chefs, reducing food waste, increasing food security and equity, and building a sense of community among growers.Although the two have been friends for years,most of the crowd has never met each other before tonight.

Bill Hoag is the proprietor of Two Sons Bakehouse, an artisanal bread-maker who has been honing his craft since 2005. The wife-and-husband team Jen and Jon Belanger operate Triple J Pastures, known for their meat and eggs with distinctively orange yolks; while Ryan Demarest and Genica Breitenbeck are the proprietors of Naked Acre Farm and Home Front Gardens, a produce and flower operation. Rounding out the guestlist are master sommelier David Keck and his partner, geologist Lauren Droege, who operate Stella14 Wines.

As we sit down at the elegantly laid table, talk inevitably turns to agriculture. One of the most notable things to emerge during the first few courses—including tuna carpaccio and a mushroom and onion tart—is that most of the guests are first-generation farmers and producers, who are largely self-taught and learned by trial and error. 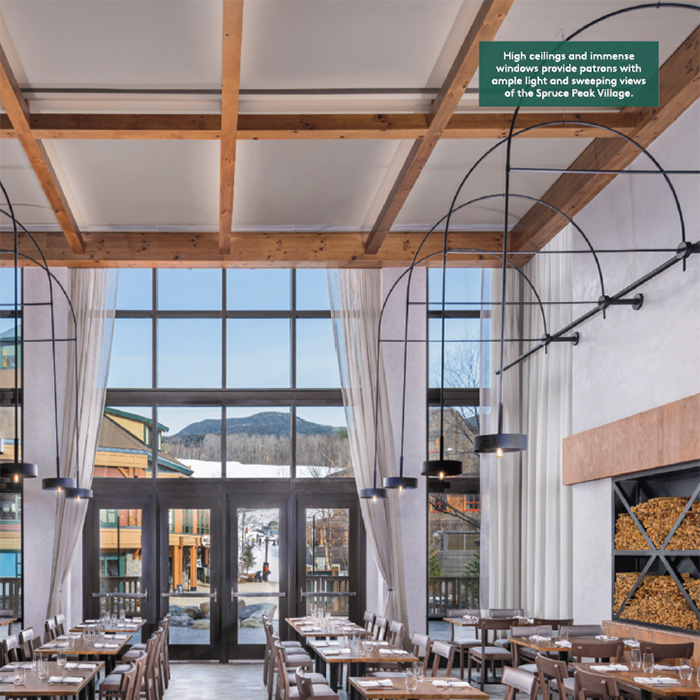 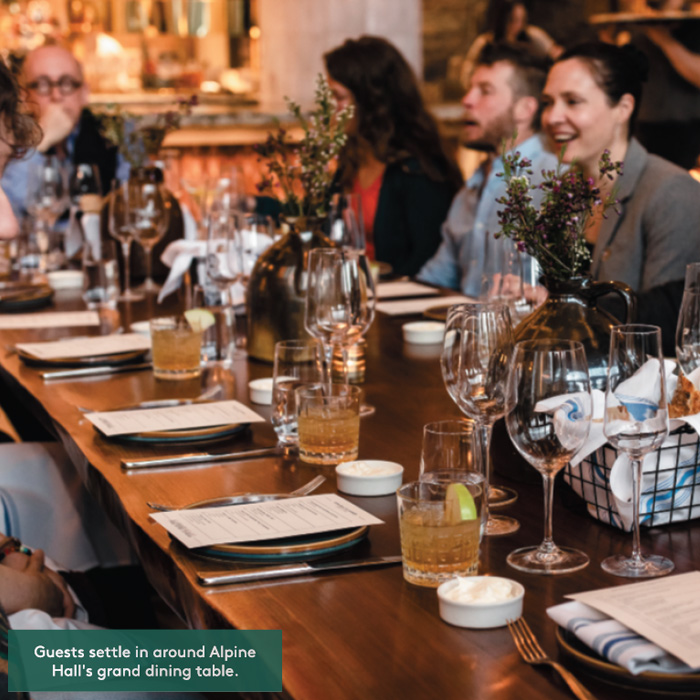 In fact, Demarest and Breitenbeck have degrees in philosophy and architecture respectively, while Keck studied opera at Juilliard. Patinkin, meanwhile, enjoyed a long career as a pediatrician in Chicago before resettling in Vermont and eventually deciding to bread prized Wagyu beef.

A course of Japanese gyukatsu sando (a breaded and fried Wagyu sandwich served with tangy-sweet katsu sauce) takes advantage of both her exceptional Wagyu and Blomgren’s culinary training in Japan. After explaining the difference between her “fullblood” Wagyu beef (in which all the stock descends from a single bull in Japan, aptly named “Notorious”), and “American” Wagyu (where the Japanese cattle—now impossible to import from Japan—are mixed with other breeds, such as Angus), Patinkin turns to Jasper Hill’s Brickley and asks if there are  similarly stringent restrictions on cheese classification.

Brickley answers that while there’s no official authority, the team at Jasper Hill relies on the expertise and advice of such legendary cheese-mongers as Ihsan Gurdal of Formaggio Kitchen in Cambridge and Boston, and the folks at Murray’s Cheese shop in New York, where Brickley worked before coming to Vermont. She adds that regular visits from a technical consultant she refers to as a “French cheese ninja” don’t hurt, either.

The other major commonality between everyone at the table, not surprisingly, is a deep passion for the region. Courses of trout almondine, two different cuts of grilled Wagyu, and a Triple J lamb tagine are accompanied by pours of organic Stella14 Wines and leave everyone thoroughly sated—but not too full for 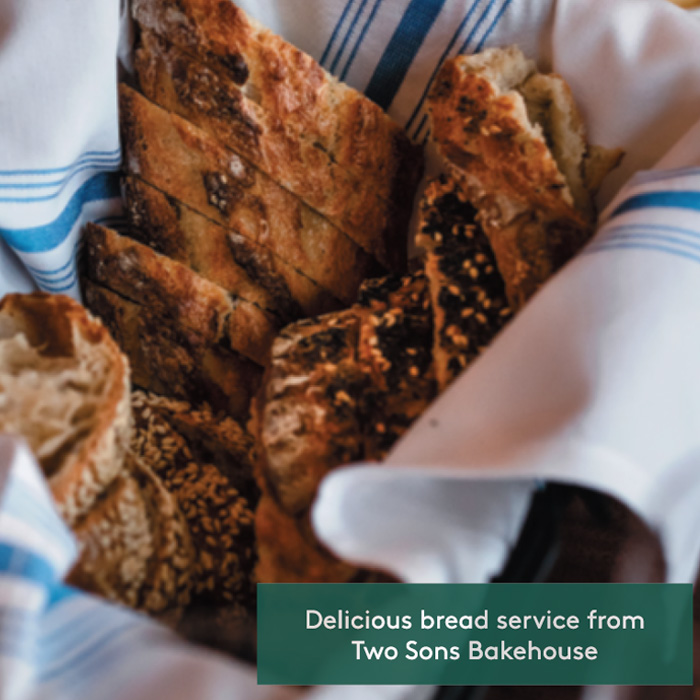 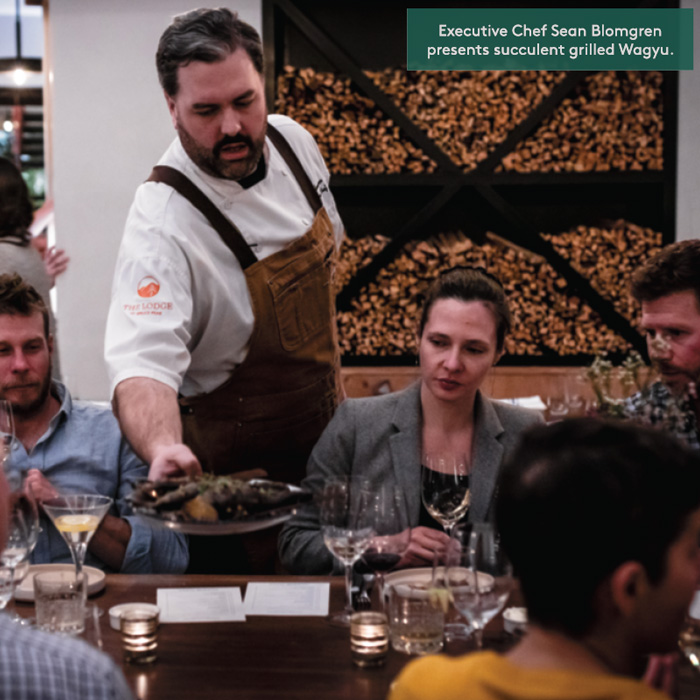 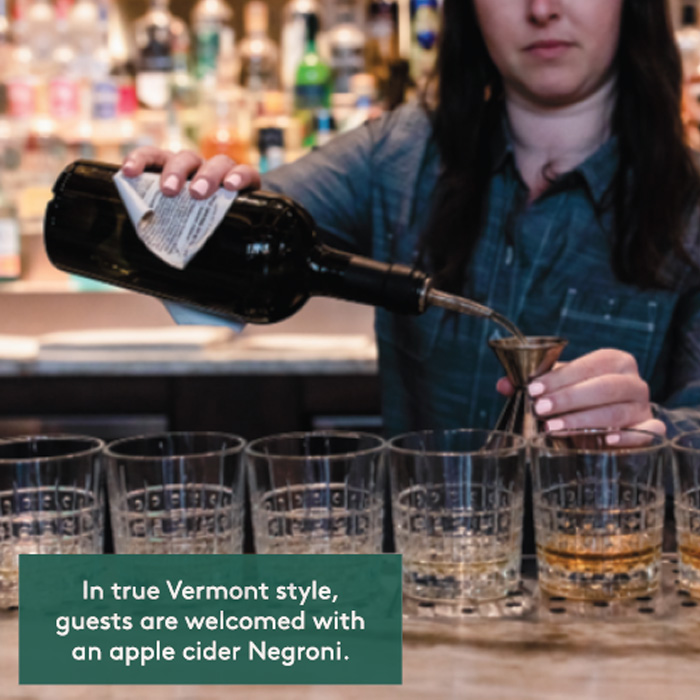 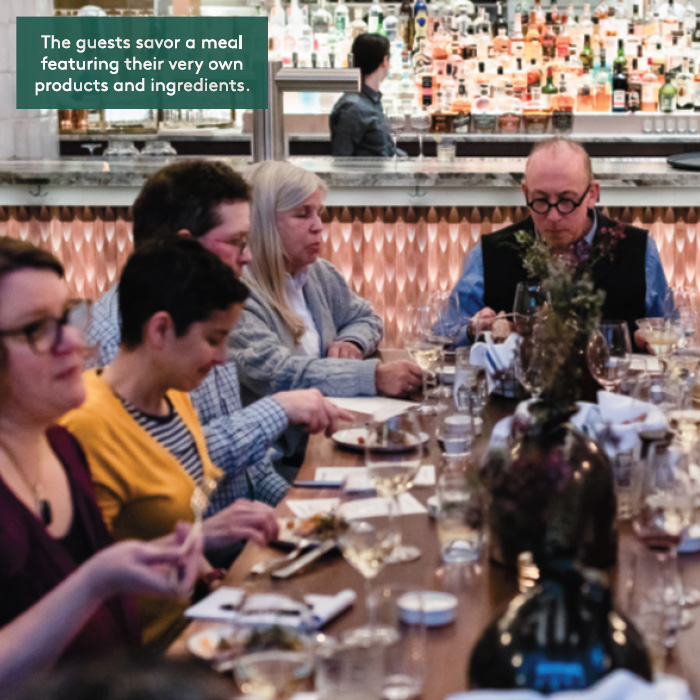 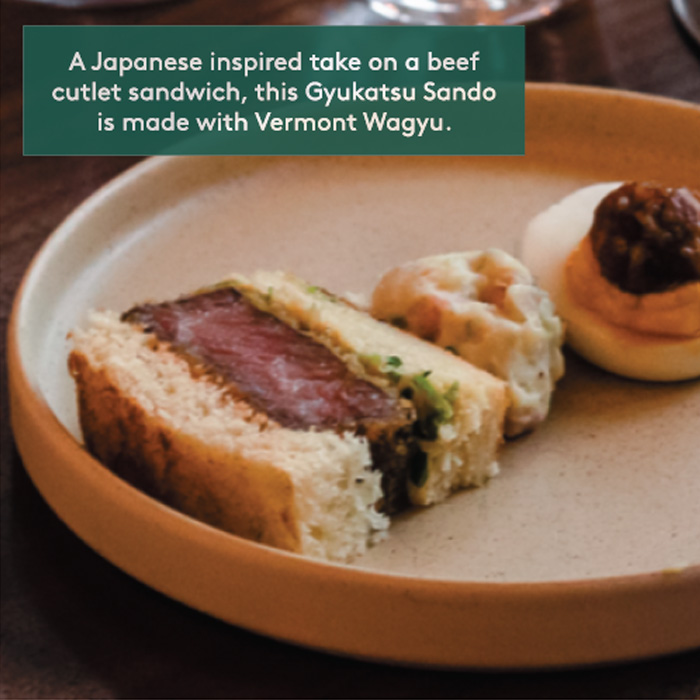 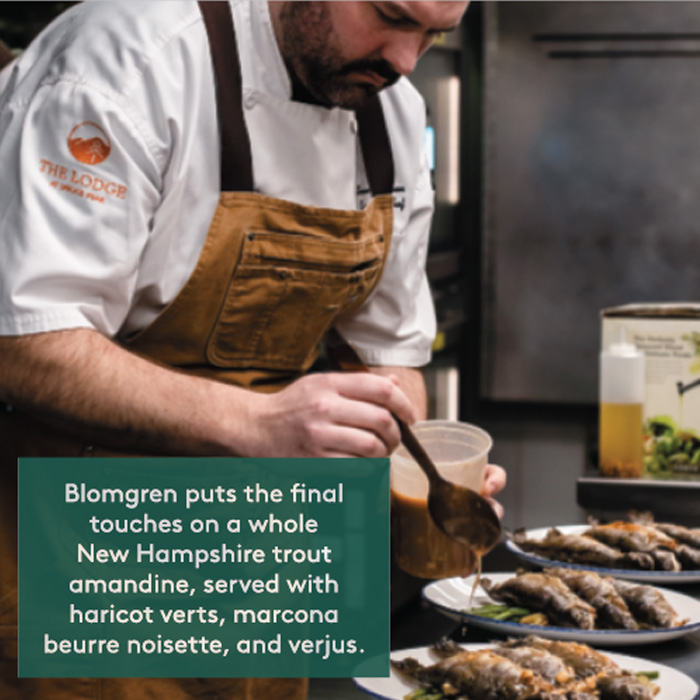 pastry chef Jessica Quiet’s dessert, which makes someone gasp and say, “This is the best chocolate cake I’ve ever tasted.”

At one point, the concept of terroir comes up. “Vermont is a completely unique grape growing region,” Keck says. “The freezing winters and short summers make for a challenging growing season, but the varieties with which we’re working now are really built to produce in this fringe climate.”

The guests begin discussing whether terroir applies to other agricultural products. Brinkley insists that it’s equally applicable to cheese; while Ms. Belanger points out that the singular color of her egg yolks is owed entirely to the land where her chickens graze.

Demarest agrees, saying, “Before we bought our place, we dug through the snow in 50 spots to see the soil.” Patinkin says, “10 years ago, I might have said, ‘Baloney,’ but I do feel like our grasses in Vermont are superior.” Demarest then points out that since most of them are such small producers, quality control is guaranteed, because everything passes through their hands.

Eventually, someone observes: “Maybe it’s just that Vermont is such a rugged place that anything that survives here has to be the best.”

After dinner, Blomgren seems pleased. “I know a few new partnerships were made,” he says. “For instance, Stella14 Wines is opening a new tasting room, and they were able to connect with Two Sons Bakehouse to supply their breads and Jasper Hill Farm to curate the cheese program.” In other words, mission accomplished. Yet another way that Spruce Peak lives up to its motto: Highly elevated. Deeply Vermont. 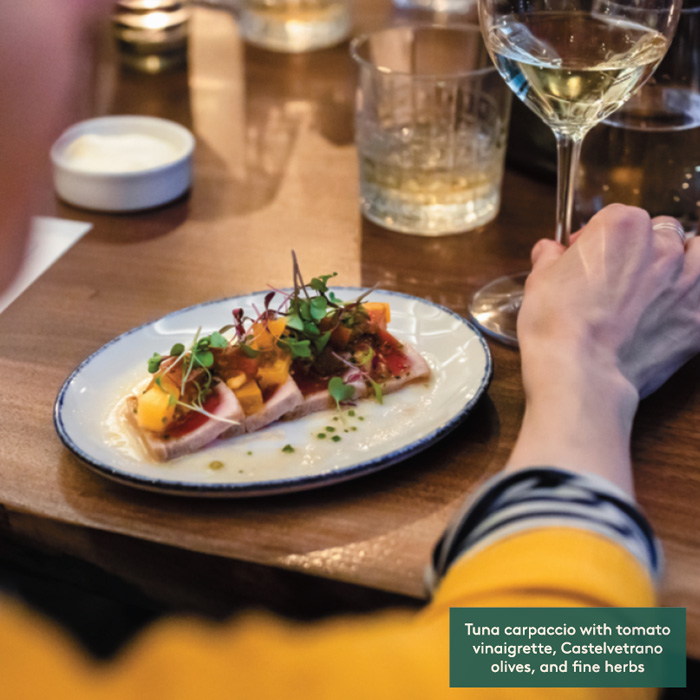 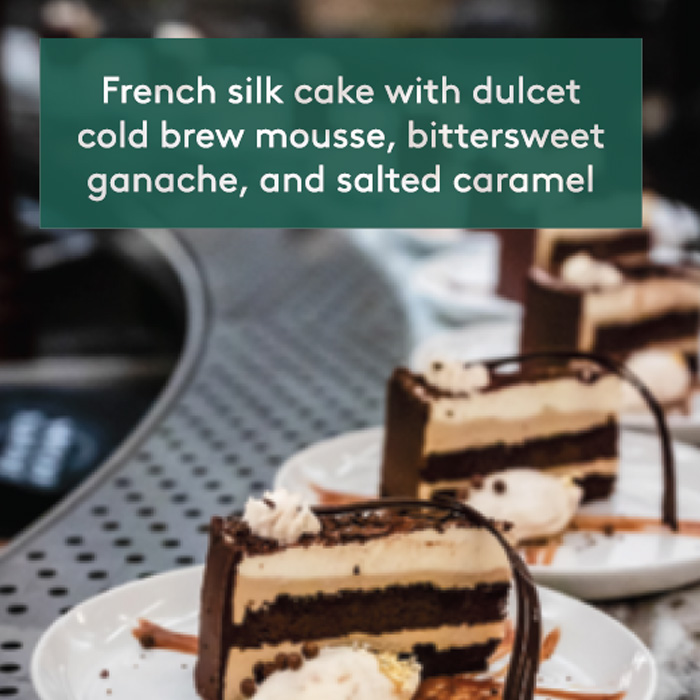